Edmond and the Vanilla Pod: Vanilla as a Comforting Aphrodisiac 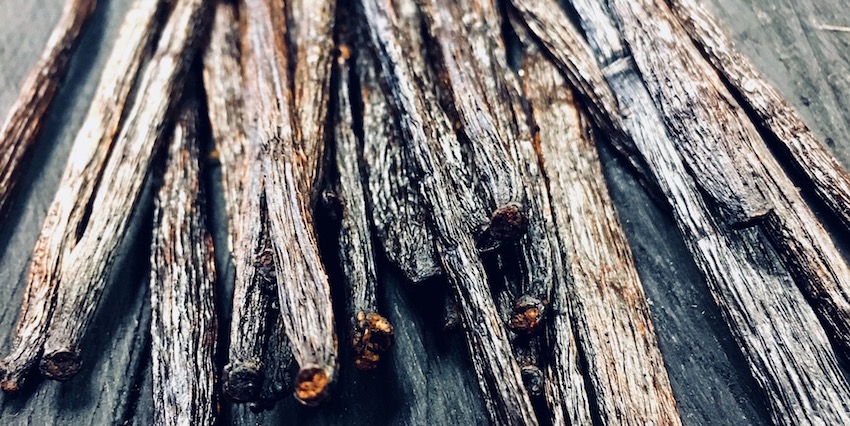 Vanilla planifolia is a beloved flavor and fragrance ingredient belonging to the orchid family, which is one of the oldest families of plants evolving more than 90 million years ago. Vanilla is a vine climber. Indigenous to Central American jungles, it grew wild on rain forest trees. The vanilla plant is known as an epiphyte, meaning it’s growth depends on the support of another as a pillar rather than for nutrition. It produces greenish-yellow flowers that surprisingly doesn’t smell like vanilla, and after pollination the flower’s petals die and fall off. Whats left is it’s short stemmed ovary which fruits by growing into something that looks like a slim green bean. That slim green bean is a vanilla pod, containing thousands of seeds, that only become aromatic after the bean has been cured and dried. It takes eight to nine months for one flower to produce one fruit.

Although vanilla is an hermaphrodite, meaning it has both male and female reproductive organs, the flowers can’t pollenate themselves. They need the help of Melipona bees, humming birds, or human manipulation. According to legend, the Totonac’s of Mexico were the first people to recognize and domesticate vanilla. They did this for hundreds of years, coveting the growing and curing process away from outsiders. When vanilla reached Europe as an exotic spice from the New World, it’s popularity and demand grew fast among the elite. Botanists and scientists from all over the world struggled to discover the secret of farming vanilla beans. Then in 1841 on the island of Reunion, a twelve year old slave boy named Edmond Albius, working under sharecropper Ferreol Bellier-Beaumont, figured out the trick. With a needle sized bamboo stick he lifted a flaplike rostellum and pressed pollen against its female stigmatic surface. Within a few days a vanilla bean began to grow. I wish I could share that Edmond benefitted in freedom, credit, and finance from his discovery that changed the vanilla industry, but Edmund never reaped any benefits. He was freed from slavery in 1848, married, died in 1888 a poor man, while the vanilla industry exploded.

Vanilla is not only a delicious flavoring agent, but it can be infused in tobacco and added to incense. The fragrance of vanilla is associated with well-being, and worldwide it’s renowned as an aphrodisiac, especially when combined with chocolate. The pods have been stitched in clothing as perfume in the royal courts of Europe. Vanilla was chewed by men in Ancient Mexico to increase virility, and the Spanish word vainella, comes from the Latin word vaina meaning lady parts. In homeopathy the tincture is used as a brain tonic and aphrodisiac, and it’s the number one flavor for ice cream in the US. With the taste and scent acting as a stimulus olfactively and palliatively, vanilla’s been used as a sexual catalyst and comfort essential for centuries.