Coming through Arabia, the pomander word derives from the French pomme d’amber (apple of amber referring to the shape and use of ambergris). The pomander could be a humble scented resinous wax solid formed into a ball, a bejeweled gold or silver sphere pierced with holes containing a solid perfume substance, or a sphere with compartments, each holding a specific aromatic material. 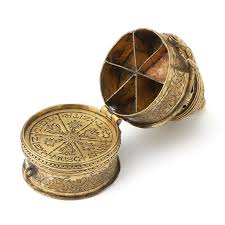 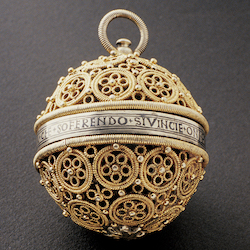 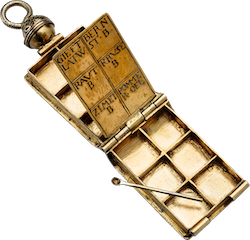 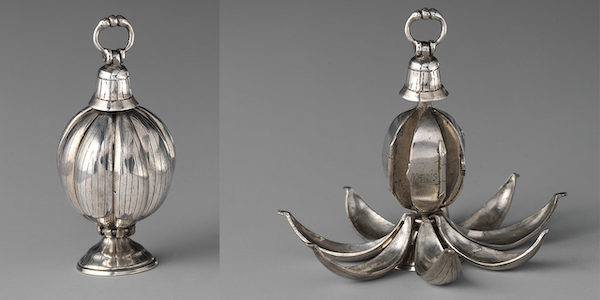 Pomanders were medicinal smelling, using mostly herbs thought to offer protection against sickness and disease. Pomanders were popular during the plague years when disease was thought to transmit through foul odor in the air. 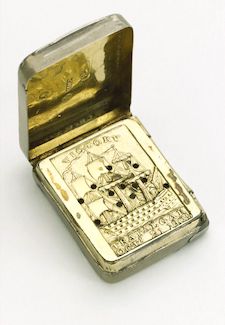 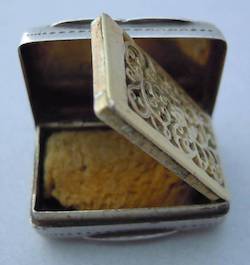 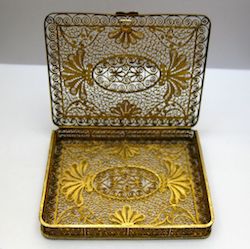 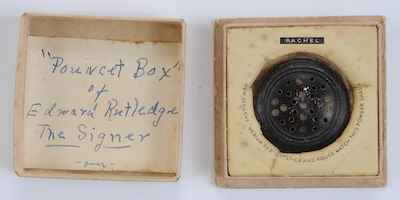 Oranges were also thought of as a safeguard against contamination, and orange peels were wrapped in scented vinegar sponges or cloth and carried around in bare hands. Which lead to the pouncet box, a flat container which was “pounced” or pierced with several holes or a perforated top. It contained a sponge soaked in aromatic vinegar meant to ward off offending odors and also disease. Generally hung from the waist, inhaling from the pouncet became a ritualized social decorum. 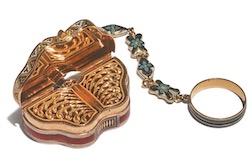 Popular during the Georgian and Victorian era, post the pomander and pouncet, was a gorgeous little stink-safeguard-gadget called the vinaigrette. The vinaigrette was a petit hinged container holding a porous material, usually a sponge, pumice stone, or crystals of potassium sulfate soaked with a much stronger scented infused vinegar, and most likely a heavy dose of camphor.

The vinaigrette was popular primarily in England for almost 100 years, during a period when people barely bathed, trash was dumped in river’s and streets, and well of course, when a woman was overcome with emotion and distress, she could easily smell her vinaigrette to stabilize her mood. At first the vinaigrette was used by men and woman, but over time it was exclusively carried by woman hanging from a chatelaine or carried in her pocket. Compared in size to the pomander and pouncet, vinaigrette’s were tiny measuring as small as a 1/2 inch in size. 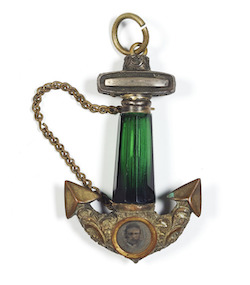 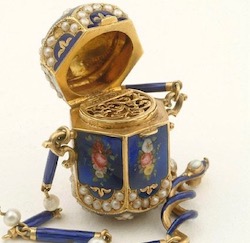 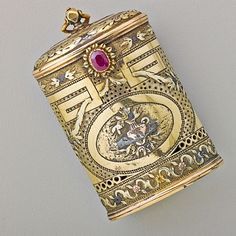 In time vinaigrettes were designed into other objects like scent bottles and jewelry, with their popularity declining in the mid 1800’s. By mid century their novelty had disappeared and what they represented was seen as outdated.